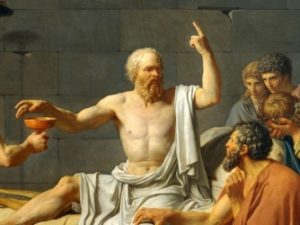 Everyone has one. The friendly elder neighbor that you have to scan for before beelining to your car in the morning. If he spots you, he waves, casually at first, but it is not safe to let down your guard.  He trods across the yard with greater determination as you toss your belongings into the front seat and hurry to start the engine like the besieged mother in ‘Cujo’ before he calls to you from the curb.  As you start to pull out of the drive, he is waving frantically with both arms, causing momentary alarm.  You roll down your window and realize, again,  your gullibility.

Nothing is wrong. It never is.

He just wanted to make sure you knew he had called the city about the car parked on the street overnight in front of Steve’s house, which then meanders into a diatribe about the pothole at the end of the block  that he noticed because he left the neighborhood in a different direction because he’s going to a new cardiologist  which leads to a conversation about his new diet which leads him finally to ask about the menu at L’Oca d’Oro and if I’ve ever heard of kale and how he’s not giving up bacon and, finally, a request to call the city about one of the things that he’s already mentioned and to come by to let him know when I’ve had a chance to do that so he can keep track of how many calls we make before they finally send out a car.  And then comes the wisdom.  “Cause we can’t get nothing done unless we all want to get something done.”  You got it, Bill.  The essence of community.

Talking to “Bill” is always a revelation if you have time to get to the wisdom and space to unpack the train of thought which is such a feat of mental, rhetorical and logical gymnastics.  We opened L’Oca d’Oro because we love all the Bills, all the neighborhood Bills who have opinions about our business, who want to share birthdays, their layoffs, their births and, unfortunately, their family tragedies too.

During a recent run-in, Bill was circuitously explaining what it is that people really want when they go out to eat. “Everybody wants to go home”, he said.

It’s easy to gloss over some of his repackaged Yogi Berra nuggets, but this one struck a chord that nagged at us to pause and really think about what we mean when we call ourselves a neighborhood restaurant.

The notion of Home is fundamental to the core of why L’Oca d’Oro came into existence, from Fiore’s grandmother’s influence in the kitchen to Adam’s inappropriate Uncle banter in the dining room, but we’ve often been challenged to convey it clearly. Every home is different and so recreating the familiar is subjective and should be impossible.  Right?

After a few too many espressos, a call to Mom, a dozen or so viewings of the dinner scene in Amarcord and the cafe scene in Roma, we think it comes to this: Home is what you trust. And in that way, our mission is clear.

We pay one fair wage to our hardworking team and they trust we aren’t taking advantage. We source our ingredients from farmers and millers we know personally so that you can trust our food. Our kitchen is wide open, so you can trust our cooks. We don’t serve foams or gels or manipulated molecules of edible substances so you can trust what’s on your plate. We designed our dining room to feel alive and lived in like a stylized version of an eat-in kitchen. Cultivating and nurturing trust is what L’Oca d’Oro is all about.

I credit Bill, one of our many beloved neighborhood philosophers, with bringing on the particulars of this revelation. And I credit L’Oca d’Oro for giving me the time and space to decipher Bill.  But, the actual philosopher Socrates said, “Don’t trust anyone who offers you the answer.” So rather than truth, let us instead offer you dinner and you can see for yourself what you come up with.